The BMW Group PressClub uses cookies. You consent to our use of cookies through your continued use of this site. You can disable cookies at any time by changing your browser settings. The BMW AG has updated the conditions of use for the website - before continuing use read the Privacy Policy and Legal Notices

Aged sixteen, Aisling had just finished taking her GCSEs at Hayling College. Unsure what to do after school, she thought of which subject she enjoyed the most – Resistant Materials. Aisling visited Chichester College to enquire about a course in Furniture Making and Design. At the College’s open day event, she asked about apprenticeships and heard about what Roll‑Royce Motor Cars had to offer and immediately decided to apply.

Profiles of Apprentices currently on the Rolls-Royce Apprenticeship Programme include: Aged sixteen, Aisling had just finished taking her GCSEs at Hayling College. Unsure what to do after school, she thought of which subject she enjoyed the most – Resistant Materials. Aisling visited Chichester College to enquire about a course in Furniture Making and Design. At the College’s open day event, she asked about apprenticeships and heard about what Roll‑Royce Motor Cars had to offer and immediately decided to apply.

Due to her age, Aisling did not have a driving licence. Her Line Manager encouraged her to join the company’s lift-sharing scheme, making life easier both for her and her father. Initially, she also found early morning starts a challenge, so Rolls-Royce staggered her start times to help her get acclimatised.

She was given the opportunity to visit Sweden and Switzerland for dealer events. Although daunting at first, Aisling found these events to be useful as it helped her to develop her communication skills. She was also able to demonstrate what she was learning in her role in the Woodshop, by crafting the substrates for dashboards in front of potential customers.

Aisling has improved her confidence dramatically and is determined to work her way up through Rolls-Royce Motor Cars as high as she can go. 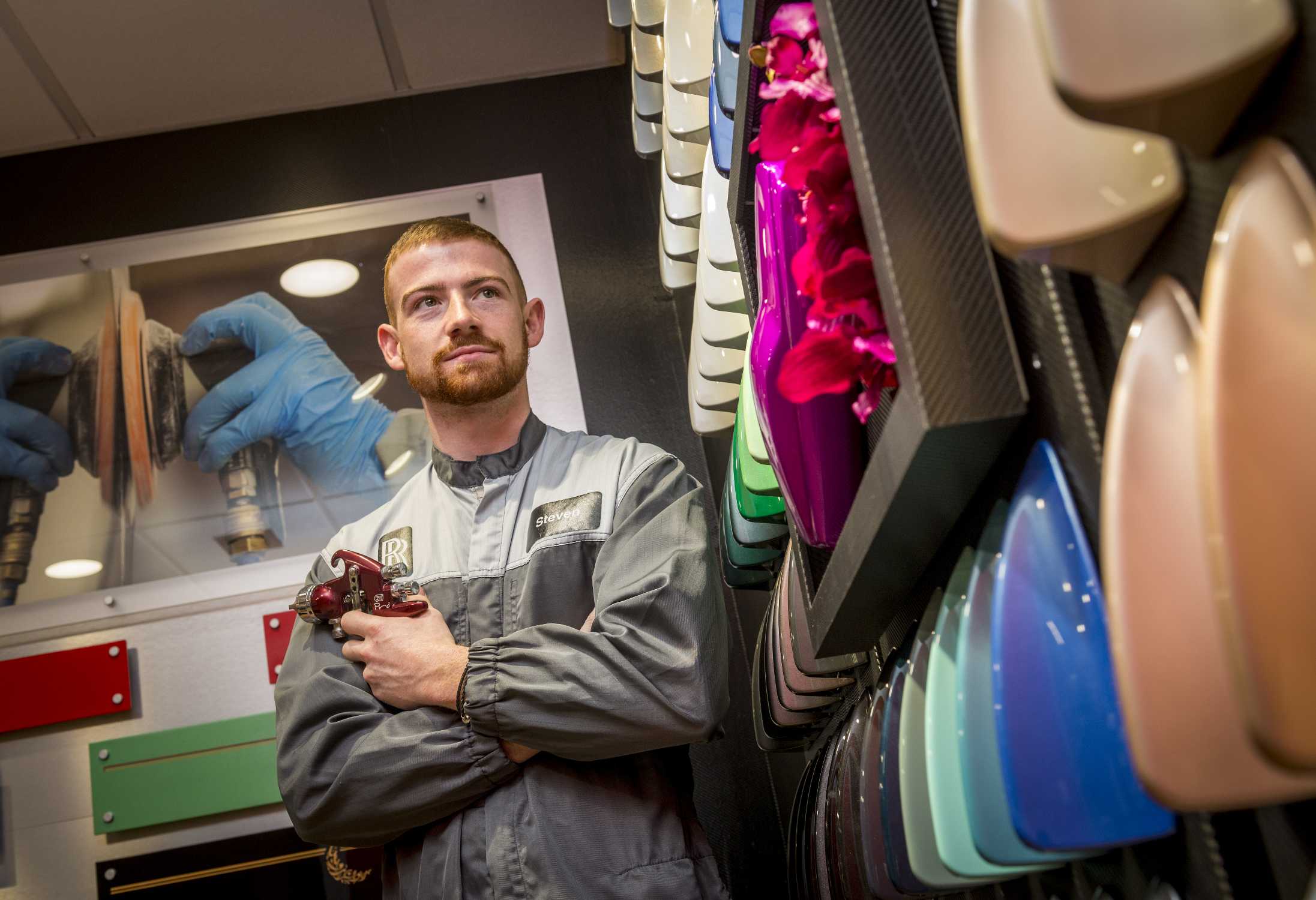 Steve studied Golf Management at college, then spent two years as a self-employed plumber before applying for apprenticeships as a way of making a career change. He was also offered an aeronautical engineering place with another firm, but chose Rolls-Royce as it provided the opportunity to be more ‘hands on’.

Now part of the Specialist Plastics team in the Surface Finish Centre, Steve has had the opportunity to work across a number of departments in Surface Finish. One of his favourite parts of the apprenticeship was vehicle repairs training at the world-renowned Thatcham Research in Berkshire, which he recently completed.

Steve has found that the support given to Rolls-Royce apprentices has been a real help. “As an apprentice, you’re treated as a normal employee, which is great; but everyone’s also really supportive, and my skill levels have definitely increased,” he says. 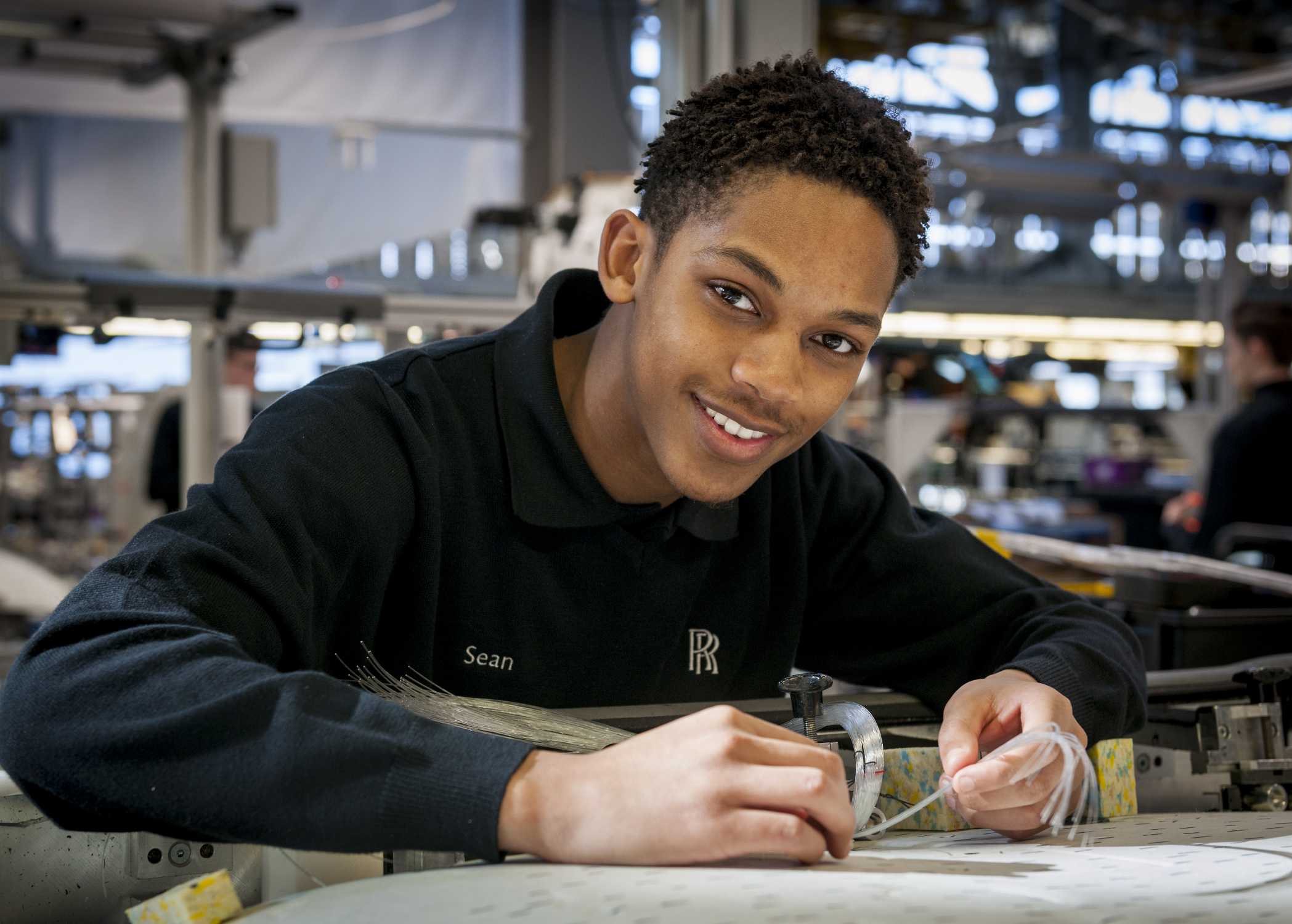 It was his Dad who suggested that Sean should consider an apprenticeship after completing GCSEs, and his parents are now very proud to be able to say that their son works for Rolls-Royce. Sean believes that taking pride in the work you do is one of the key traits of working for Rolls-Royce. Sean says the brand is recognised as the ‘best of the best’ and he wanted to represent that.

One of Sean’s favourite parts of the job is working on the engine build, and really exploring how the car works. This is where it became clear that you don’t get this level of engineering detail anywhere else in the world.

Despite the regular question of “When will you be driving a Rolls-Royce?” the opportunities Sean has had through the apprentice scheme have been incredibly exciting. The chance to be chauffeured in the cars with his family on the company Family Day, was a great opportunity. The induction apprentice trip to Devon saw the group take part in a number of team building activities such as rock climbing and archery. This was a real confidence booster for Sean as he got to meet other apprentices across the business. 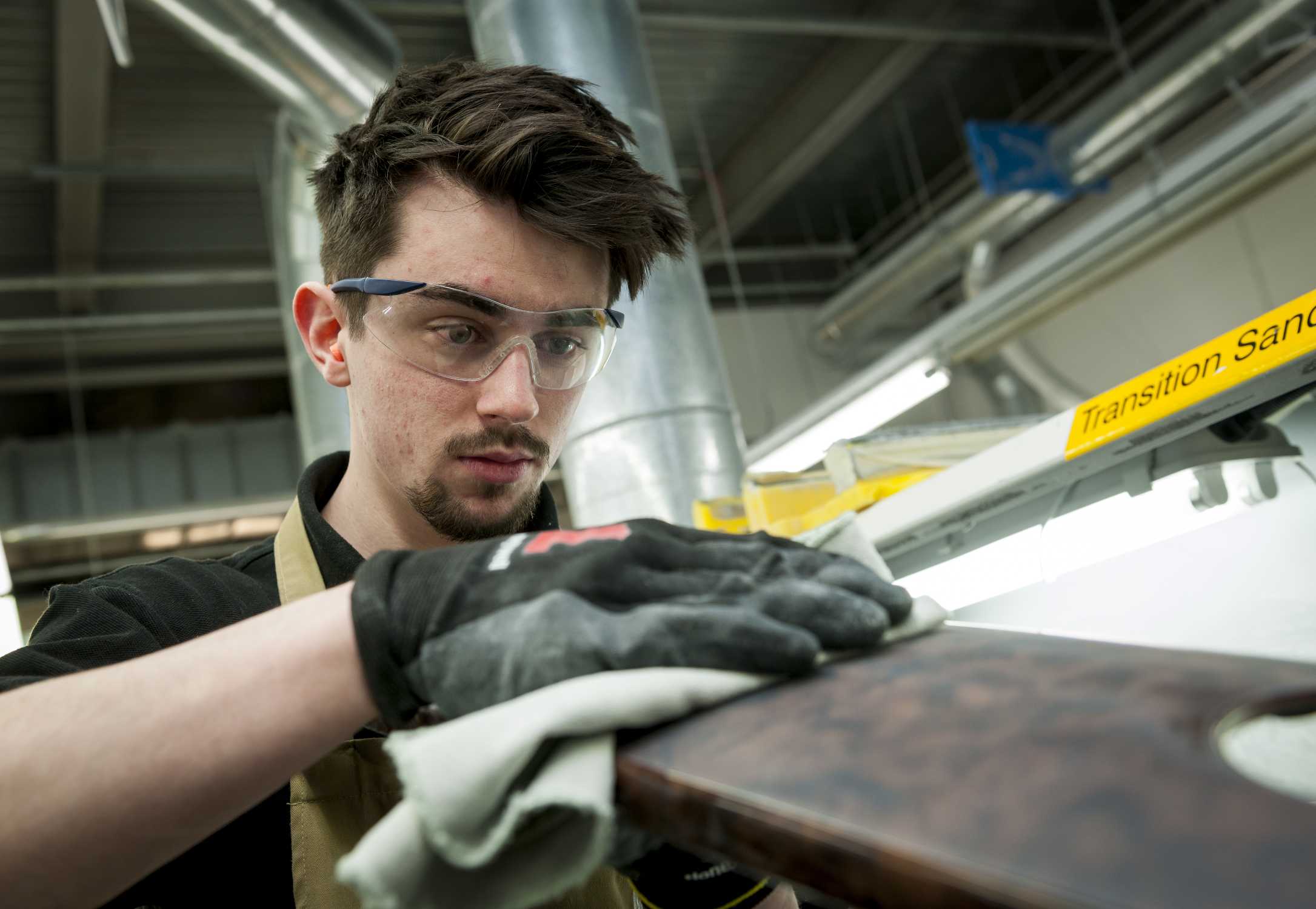 After finishing his GCSEs, Callum was unsure what to do next. He knew Rolls-Royce offered a world class apprenticeship programme but never thought he would be lucky enough to get a place. He attended a careers talk at his school to find out more and applied instantly.

After getting his place, Callum was able to work with some of the finest materials in the world at Rolls-Royce, learning on site and at college as well.

Callum used these skills to build a small refectory table and wall cabinet during his early training. He is currently working on his final project of making a large table.

Callum is looking forward to working in a number of areas across the Woodshop and learning from the finest craftspeople in the business.

He is excited about the opportunities that that the apprenticeship scheme offers and what the future holds during his time with Rolls-Royce. 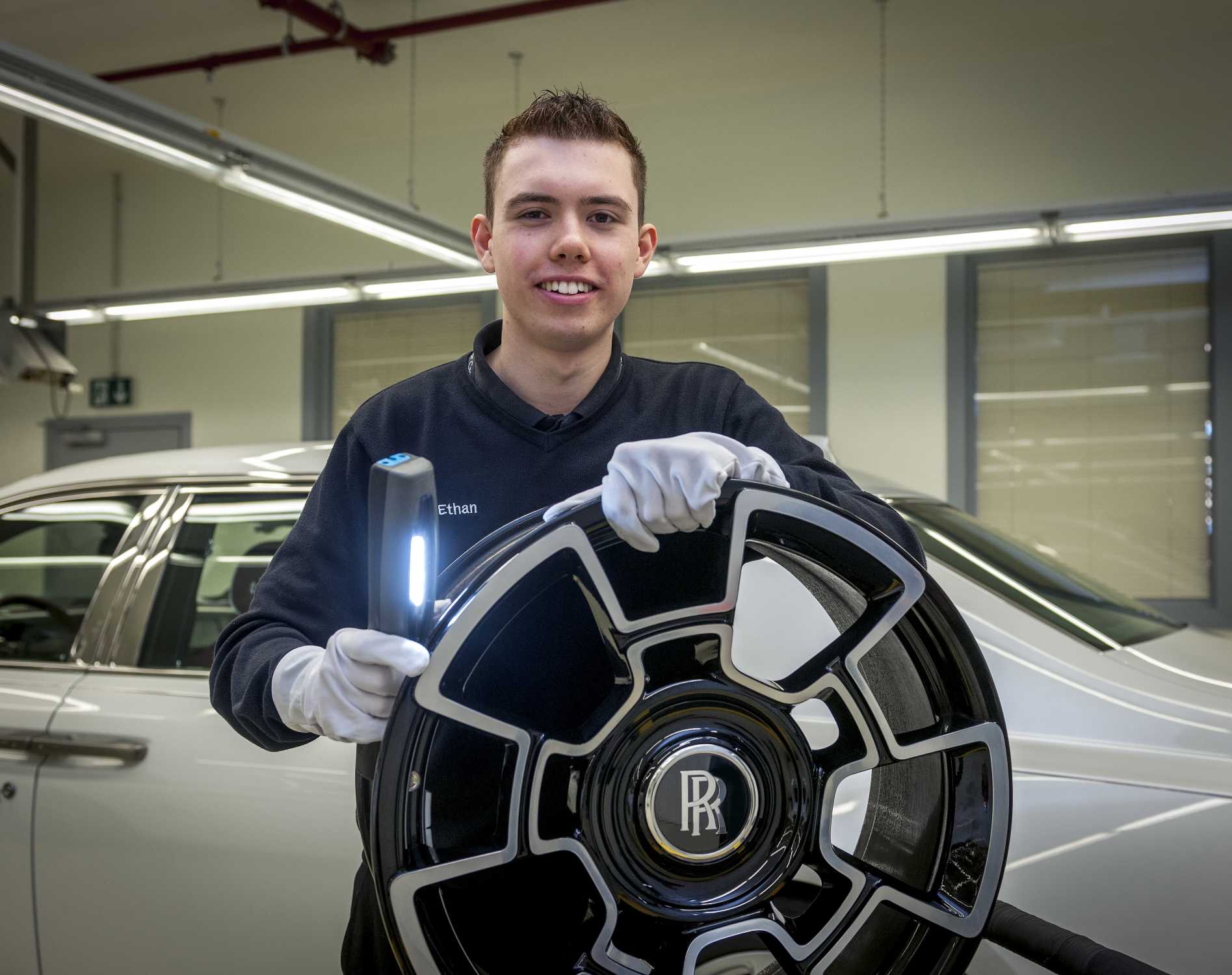 Ethan was recommended to the Rolls-Royce Apprenticeship scheme by his teacher who had seen previous students achieve so much in recent years. After talking with a number of the team at an apprentice fair, Ethan decided that the opportunity was too good to miss.

Since joining the team at Rolls-Royce, Ethan has worked in a number of departments with different roles and responsibilities. After his first year studying full time at college, he moved on to supplier parts quality. Here Ethan was part of a team that ensures every single part of the car is the finest Rolls-Royce quality. Ethan’s current placement sees him working in a number of department’s learning how the wider business works. The opportunity to work on the assembly line has been one of the most exciting parts for Ethan. “It is amazing to say that I have built Rolls-Royce’s” he says.

The opportunity to lead projects has helped support Ethan’s personal development and confidence. With support, Ethan is leading a project looking into metrology (measurement for the brand new Rolls-Royce Cullinan).

The apprenticeship programme has afforded Ethan the opportunity to learn new things and gain new experiences that can help further his career. 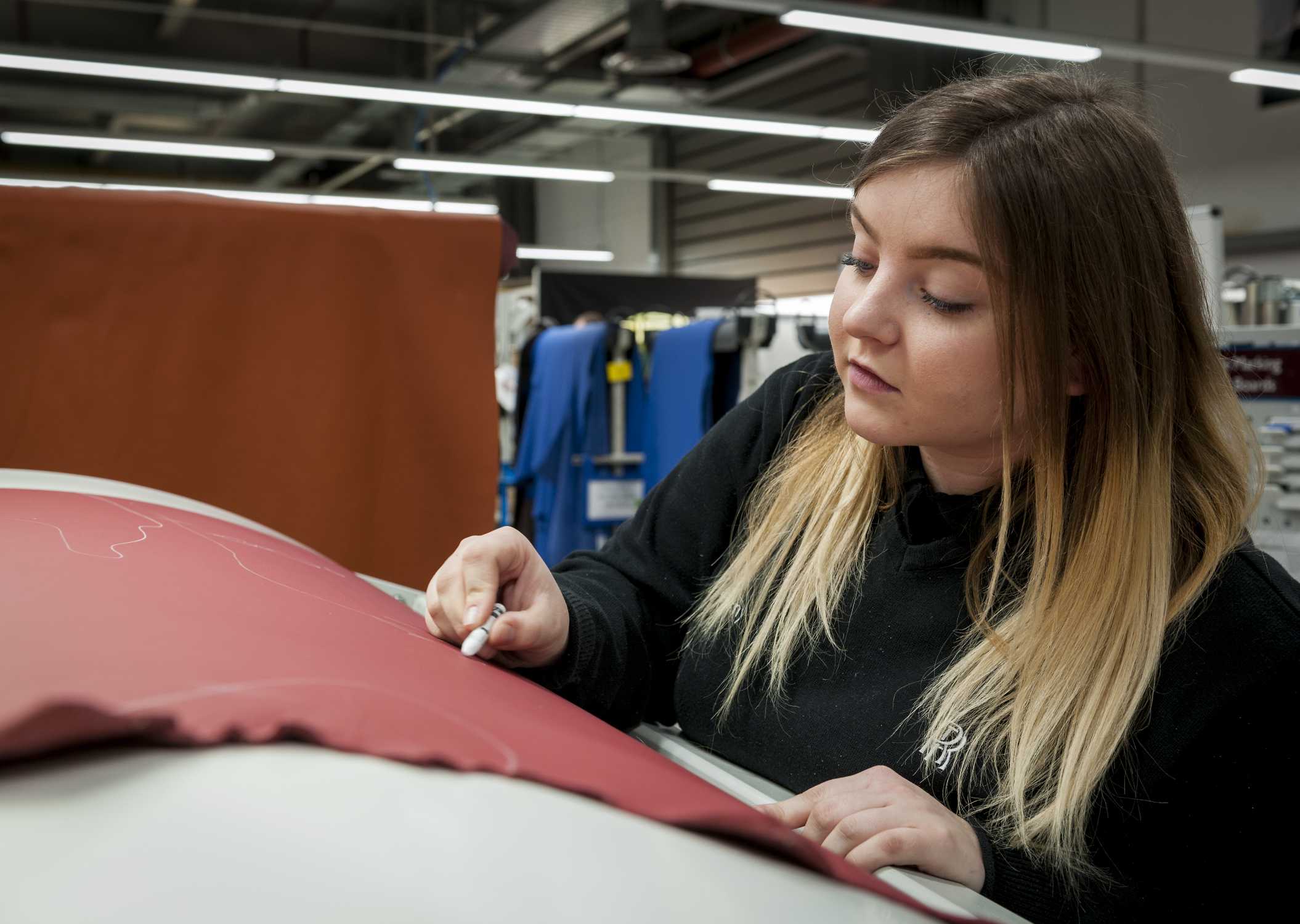 Having completed a degree at the Art University of Bournemouth, studying BA Textiles, Brienny was looking for some hands-on experience. When looking into local textiles job opportunities she came across the ‘Leather Sewing Apprentice’ role at Rolls-Royce. Brienny applied as the role would allow her to utilise her skills and produce a final product. This seemed like ‘the perfect fit’.

Since joining, Brienny has completed three, two-month placements within the Leathershop.  Her first role was in cutting, then sewing and more recently, in Brienny’s favourite role, seat build. This is where the luxurious Rolls-Royce seats with their numerous massage settings are built.

Brienny has been involved in a number of projects during her time at Rolls-Royce. However, her stand out moment was collaborating with the world famous Bespoke department to create a series of leather Christmas decorations. Along with another apprentice, Brienny designed and produced over 1000 decorations that were sold in the run up to Christmas, with all proceeds going to the company’s house charity.

Brienny will shortly be completing her first year. In that time, she will have been given the opportunity to work in all six areas of the Leathershop. This will provide her with the ability to pinpoint a preferred area to pursue in her career. 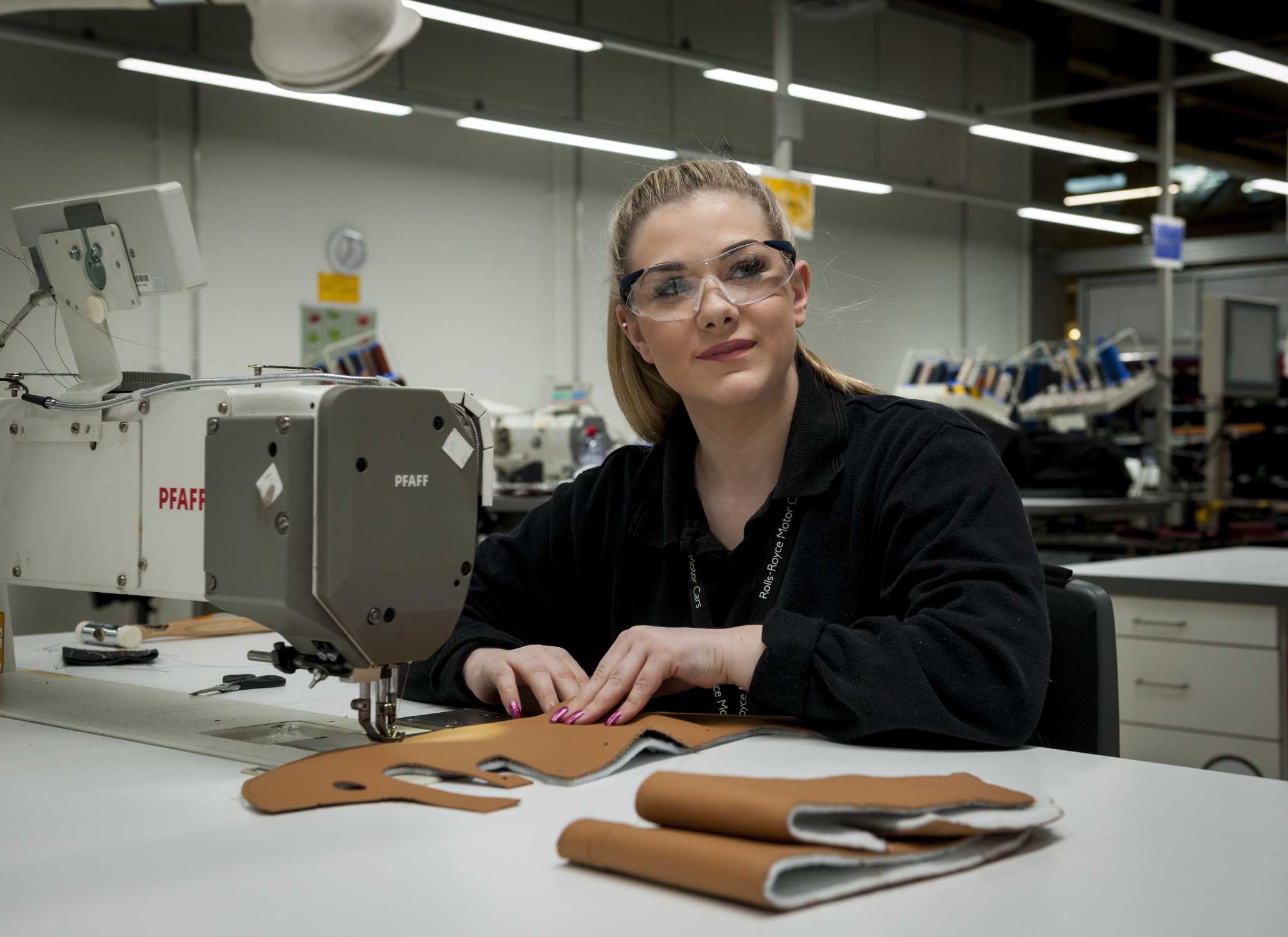 For a car lover like Georgia, the prestige of working for the world’s most luxurious car brand was a once in a lifetime opportunity. After studying a Business BTEC and unsure what to do next, Georgia started looking online at apprentice schemes. She had heard amazing things about the scheme from previous apprentices and decided to apply for Rolls-Royce.

Georgia’s first week at Rolls-Royce was quite an experience. She was ‘blown away’ by the Home of Rolls-Royce at Goodwood and how friendly and supportive everyone was. The opportunity to go through different placements within the Leathershop was a great opportunity to learn something new every day.

The experience of working with the finest quality materials and textiles was a great draw for Georgia: “The materials used at Rolls-Royce are unlike anything I have seen before”.

The apprenticeship at Rolls-Royce has taught Georgia lessons such as how to be independent, working in a team and improving her confidence. The support from management has been key in this, “they have always been there to help me” she says.

Georgia is looking forward to continuing to develop her skills in a variety of locations in the Leathershop and expanding her knowledge.