ROLLS-ROYCE CELEBRATES CENTENARY OF THE ‘TWENTY’

Rolls-Royce Motor Cars marks the centenary of the legendary 20 H.P., known to the world simply as the ‘Twenty’, launched on 6 October 1922. Designed by Sir Henry Royce, it ranks among the most important and influential models ever produced by the marque.

“Every Rolls-Royce is both evolutionary and revolutionary: true to our essential design and engineering principles, while taking technology, comfort and the driving experience to a new level. But during our long history, there have been certain defining models that have permanently altered the wider automotive landscape. The ‘Twenty’, launched 100 years ago, is one of them. We join with owners and enthusiasts around the world in marking this very special occasion and celebrating the lasting legacy of this legendary and much-loved motor car.”
Torsten Müller-Ötvös, Chief Executive Officer, Rolls-Royce Motor Cars 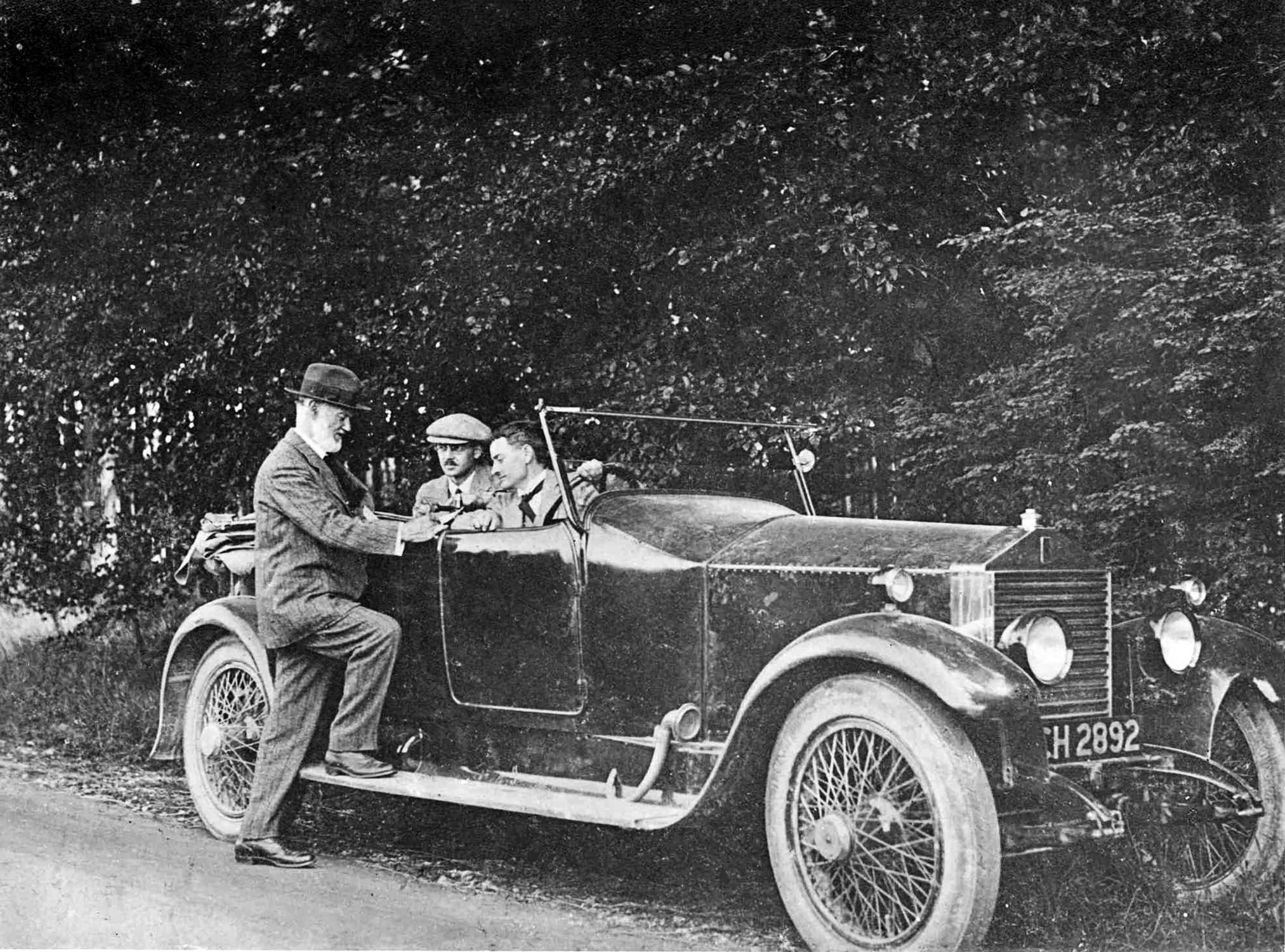 Rolls-Royce Motor Cars marks the centenary of the legendary 20 H.P., known to the world simply as the ‘Twenty’, launched on 6 October 1922. Designed by Sir Henry Royce, it ranks among the most important and influential models ever produced by the marque. As the first Rolls-Royce specifically intended for the owner-driver, rather than predominately for chauffeured use, it is a direct ancestor of today's Ghost, Wraith, Dawn and Cullinan. And in setting the mechanical template for generations of Rolls-Royce motor cars that followed it, the ‘Twenty’ also has historical parallels with the forthcoming Spectre.

LA BELLE EPOQUE
In 1906, Rolls-Royce introduced the 40/50 H.P. – better known as the Silver Ghost. On the strength of its near-silent engine, flawless reliability and mighty feats of endurance, this epochal motor car earned the title – which the marque has never since relinquished – of ‘the best car in the world’. It also established a new ‘single-model’ policy in place of the company's previous practice of offering several different models concurrently. This proved a financially prudent strategy up to the outbreak of the Great War in 1914.

For the next four years, Rolls-Royce devoted itself to military projects, including an armoured version of the Silver Ghost and a series of magnificent aero engines. But the end of hostilities in 1918 revealed an entirely new world, in which the pre-War socio-economic, political and cultural orders had been utterly transformed. For Rolls-Royce, the shift from war footing to peacetime meant there was now huge excess capacity at its Derby works, which by 1919 employed some 8,000 workers. 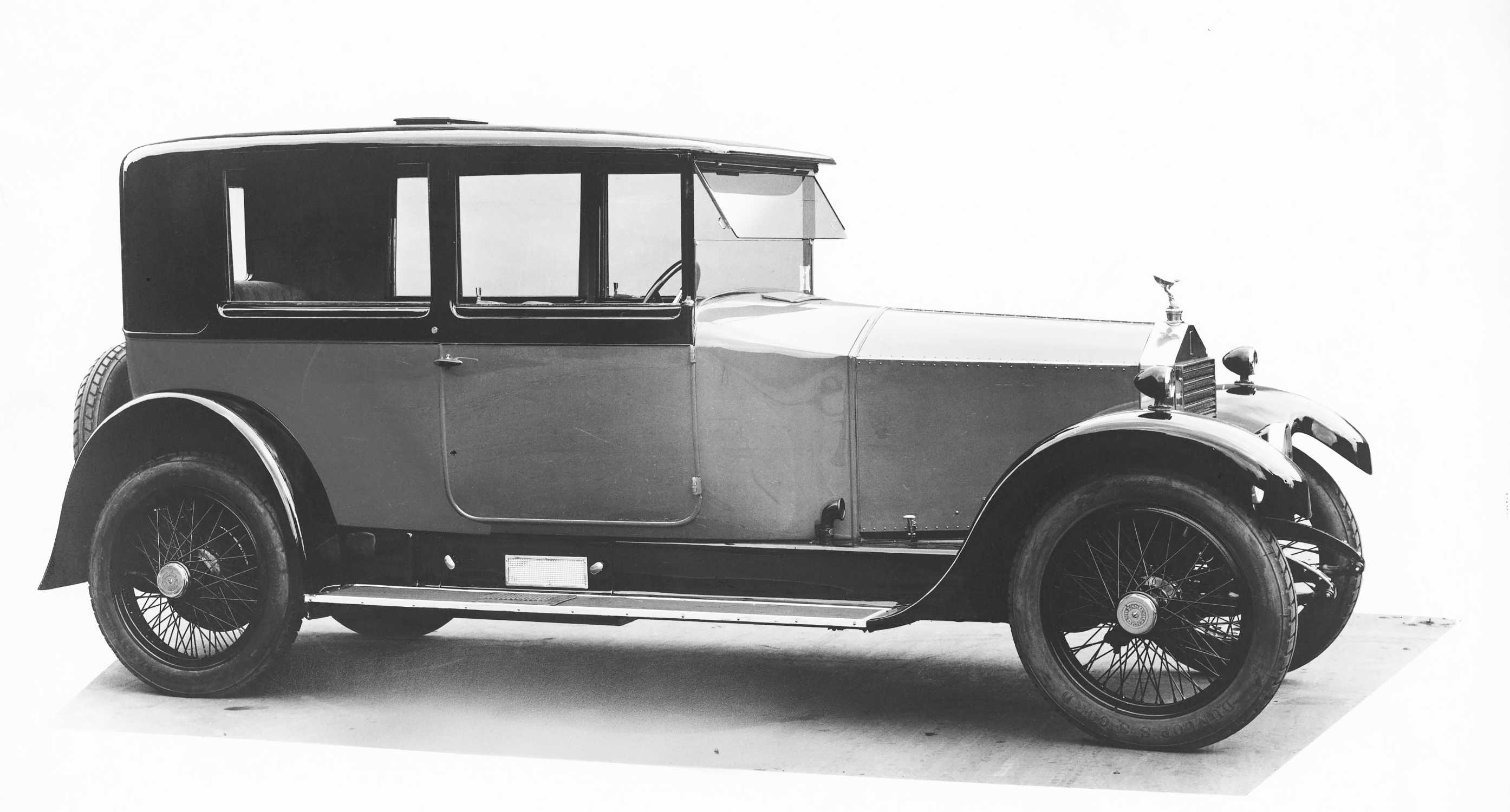 A CAR FOR A CHANGED WORLD
Even before the Armistice in 1918, Henry Royce foresaw the need for a smaller car to counter a likely reduction in sales of the larger 40/50 H.P. chassis. Visionary that he was, Royce anticipated – correctly – that many Rolls-Royce owners would find themselves unable to recruit, retain or afford the substantial domestic staff they had employed before the War. The option of a motor car that required neither the laborious and costly weekly maintenance demanded by a Silver Ghost, nor a chauffeur to drive it, would, he reasoned, be an attractive proposition.

Two years later the company directors agreed with him. In 1920, Royce transferred his engineering skills from ‘designing’ a smaller car to ‘manufacturing’ it. This decision was underpinned both by the need to take up the remaining oversupply at the Derby factory, where the workforce had already been reduced to 2,000, and to supply a car that would be better suited to some customers' post-war needs than the 40/50 H.P..

Royce instinctively understood that, despite their now more straitened circumstances, these owners were accustomed to Rolls-Royce standards of excellence and would expect nothing less from a new model, regardless of its size and specification. The company therefore went to great lengths to reassure them about the proposed 20 H.P., stating that 'under no circumstances would the standards of excellence maintained in their products be diminished'. In September 1920, Royce confidently informed the Board he was satisfied ‘that the standard of excellence of production was maintained’. 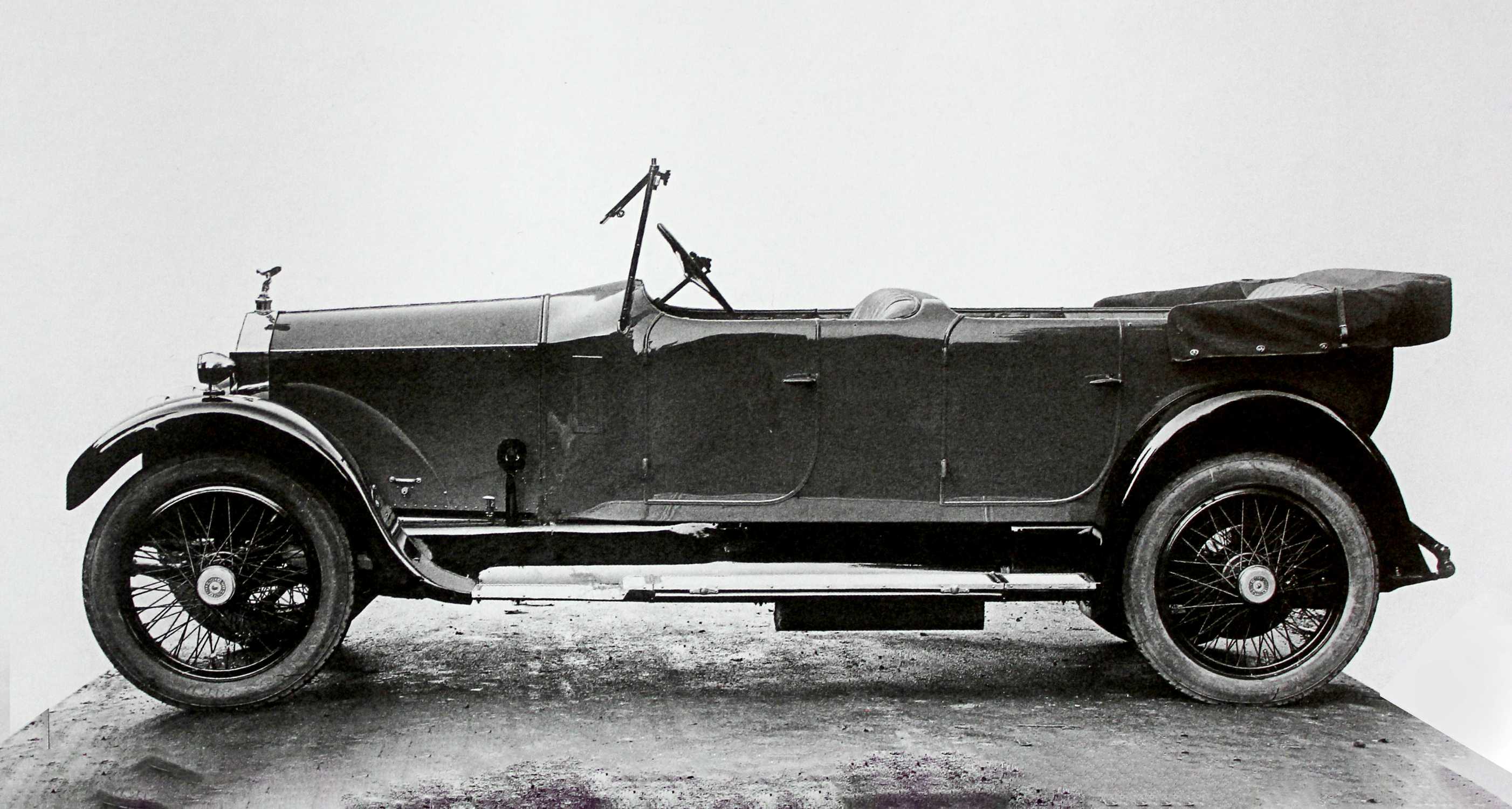 THE ‘TWENTY’
On 6 October 1922, Rolls-Royce unveiled its new ‘small horsepower’ car. Its straight-six cylinder, 3.1-litre engine was less than half the size of the Silver Ghost's 7.5-litre unit. However, the new model also weighed around 30% less than its larger sibling. This, combined with other advances in engineering design since the Silver Ghost's debut in 1906, meant the performance gap between them was narrower than the raw numbers might suggest.

Indeed, it was immediately obvious that the new 20 H.P., or simply the ‘Twenty’ as it quickly became known, represented a huge technical leap forward. The lightness of its controls and the performance of its steering, braking and suspension systems made the Silver Ghost – though still superior to its direct competitors – seem rather outdated by comparison.

These qualities also rapidly established the ‘Twenty’ as a firm favourite among both established Rolls-Royce devotees and those new customers to whom a larger car of aging design did not appeal – especially where the purchase price and ongoing running costs were important considerations.

Owners were happy to share their enthusiasm for the new model. In letters to the motoring press, one praised it as ‘a charming piece of mechanism’ while another declared, ‘I have never handled anything as sweet-running’. A company advertisement quoted an expert assessment of the car as ‘everything a motorist can want… motoring with a high degree of refinement and its simplicity of construction will delight the driver’. After taking delivery of his car, a contented owner wrote to the company from his home in France: ‘I drove my 20 H.P. here from Liverpool and am very satisfied with the running of the engine, not having to change gear between Liverpool and Versailles’. 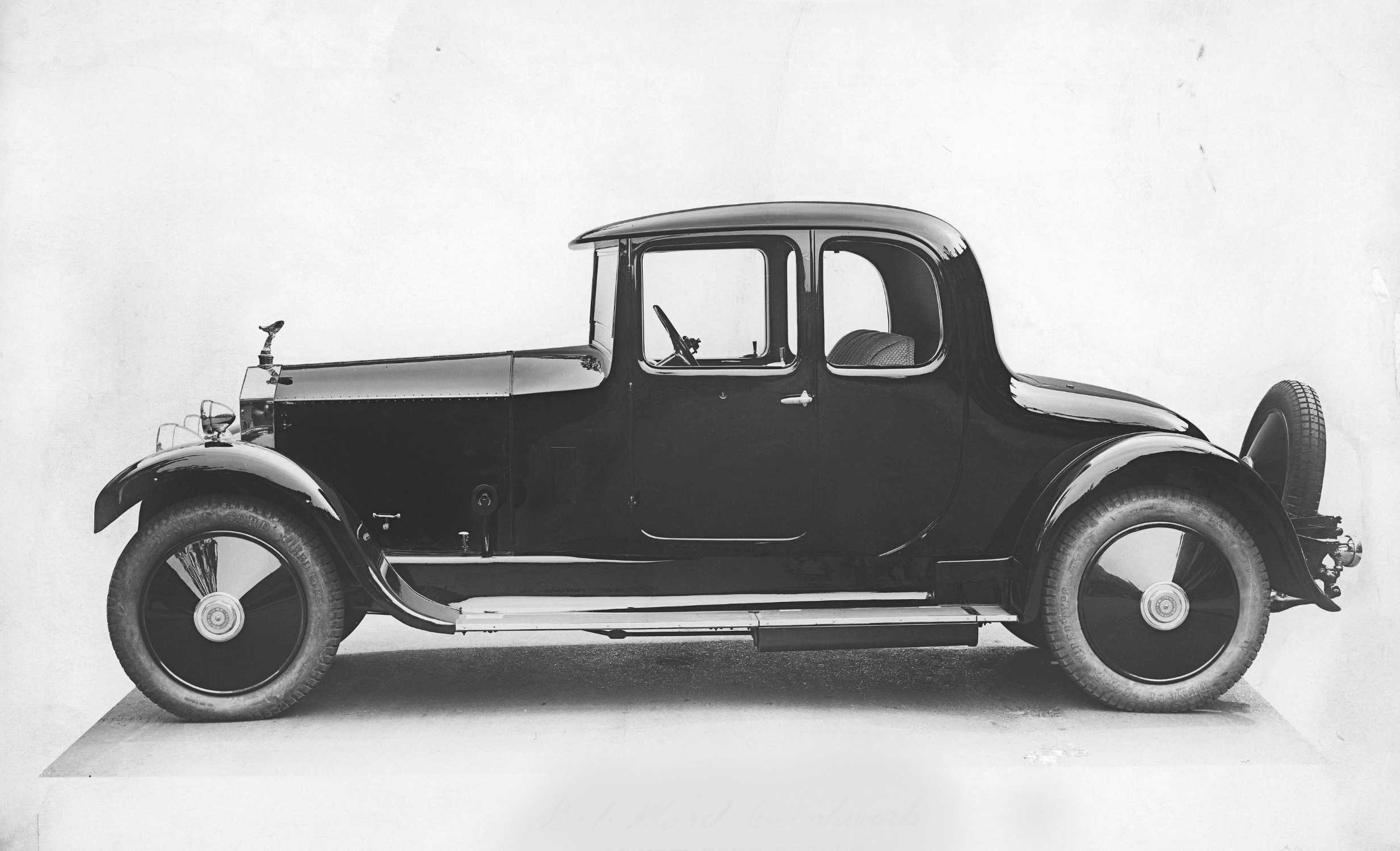 WEIGHTY ISSUES
Like all Rolls-Royce models of the era, the ‘Twenty’ was produced as a ‘rolling chassis’, on which owners commissioned bespoke bodywork from an independent coachbuilder. Royce intended that it should primarily be an owner-driver car and hoped the coachbuilders would keep their creations’ size and weight as low as possible.

However, he was unable to change the habits of a lifetime among some customers. Many ‘Twenty’ owners persisted in specifying their preferred style of solid, formal coachwork that was both much heavier than required and produced greater wind resistance. To Royce’s understandable irritation, these massive, overbuilt bodies inevitably compromised performance.

Ever the pragmatist, Royce knew there was only one way to improve the weight‑to‑performance ratio. In 1929, the ‘Twenty’ was supplanted by the 20/25 H.P., powered by an enlarged capacity engine. Even this did not fully solve the problem and in 1935, Rolls-Royce produced the 25/30 H.P. with a 4.25-litre powerplant. The ‘small horsepower’ era finally came to an end with the Wraith of 1938. These later iterations were all direct developments of the ‘Twenty’, and today add further lustre to its record and reputation.

A LASTING INFLUENCE…
The ‘Twenty’ had a profound influence on Rolls-Royce long after production ceased in 1929, by which time no fewer than 2,940 examples had been built. In particular, the straight‑six cylinder engine – with detachable cylinder head and overhead valves – would provide the template for Rolls-Royce engines for the next 30 years. Open the bonnet of any six‑cylinder Rolls-Royce right up to the Silver Cloud model (1955-9) and it is recognisably the same design, albeit with many internal improvements. And when the by-now venerable Silver Ghost was replaced by the new Phantom in 1925, its engine also adopted the essential Twenty pattern.

…AND A LIVING LEGACY
Up to the final Phantom VI in 1992, Rolls-Royce maintained the two-model policy it had introduced with the launch of the ‘Twenty’ 70 years earlier. It enabled the company to meet the needs of two groups of customers: those who chose to enjoy the ‘magic carpet ride’ from the rear seat while being chauffeured; and those who preferred to drive their motor car themselves.

This approach continued into the modern era when Rolls-Royce Motor Cars created the smaller Ghost to accompany its larger pinnacle product, Phantom. But today’s Rolls-Royce clients are a much broader and more diverse constituency than they were in the 1920s, which is reflected in the company’s expanded product portfolio.

There are also historical parallels between the ‘Twenty’ and Rolls-Royce’s new battery electric vehicle, Spectre. Both demonstrate the marque’s willingness and ability to respond to a changing world, in which customers have new needs and requirements and old norms no longer apply. Each represents a step change in technology that will shape the Rolls-Royce product family for decades to come. Above all, they embody Sir Henry Royce’s most famous dictum: “take the best that exists and make it better”.